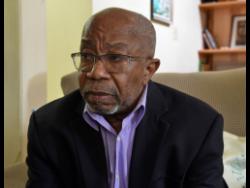 “We must restore confidence in the judicial system” | Main stories

He calls on Jamaicans to do their part by appearing as jurors and assisting the police in criminal investigations. The contribution of the public is democracy in action, which is not reserved for government or any particular sector of society, he said last week.

Campbell believes that the failure of citizens to serve is indicative of a lack of civic pride. And as the island celebrates 60 years of independence, he calls on the government to reintroduce civic education in schools to give children a much-needed foundation to contribute to society.

“The proper functioning of a justice system requires the contribution of ordinary Jamaicans; this is what I consider fundamental and essential. Now the question is: to what extent are Jamaican citizens involved in the system and in the administration of justice? Campbell reasoned with The Sunday gleaner.

“The fact that the Constitution makes peace, order and good government the primary and essential objective of the executive means that only this body is entrusted with this function. My view is that it goes further than that and that reasonable steps should be taken to ensure that citizens are encouraged to participate in the administration of justice.

He continued: “When you look at the Jamaican situation, for years the system has failed. For people who know how the courts work, you start with the failed jury system. Chief Justice Bryan Sykes has called for an end to jury trials, which I think is a devastating thing for democracy, for the country, and for what the rule of law stands for, because the right to a trial by your peers is an invaluable right that should not be dispensed with very easily or at all.

“But I recognize that the Chief Justice and some attorneys have been brought to this point, that the jury system is a hindrance, because too often trial dates after trial dates, cases cannot proceed due to an insufficient number of jurors.”

With nearly 50 years in the legal profession, Justice Campbell has dedicated his life to serving his country since graduating from Norman Manley Law School in 1975, earning him an induction into the Order. of Distinction (Commander Class) in 2016.

While in the Attorney General’s Office, he was appointed Queen’s Counsel and was responsible for negotiations with the World Bank on behalf of the Jamaican government as well as privatization of the energy sector.

During his time on the bench, Justice Campbell oversaw a number of high-profile cases, sometimes making controversial rulings.

He recalls a decision he made in a Home Circuit case that caused an uproar in legal and court circles. The decision was also publicly criticized and ridiculed.

“In this particular case, several defendants were charged with the murder of a police officer. They had been appearing in court for 15 years and had still not been judged. The main reason the case did not go to trial was that the court was unable to secure a sufficient number of jurors,” he said.

The retired judge said that in reviewing the situation, he asked prosecutors and defense attorneys if they thought the 15-year delay before trial was unconstitutional and they could not respond.

The defendants were out on bail and the case was adjourned with no date set for their return to court. The Crown has been advised that it may resume the case when it is able to proceed with the trial.

The case did not go to trial and Justice Campbell said he had written a judgment setting out the reasons for his decision, as the long delay was a clear violation of the men’s constitutional right to a trial in a reasonable delay.

“The position I have taken has been supported by legal authorities whom I have reviewed,” he said.

He said Chief Justice Sykes, who was then a Puisne Judge, was one of the few people to agree with the ruling.

Regarding the huge backlog of criminal and civil court cases, Justice Campbell said The Sunday Gleaner that additional judicial resources, including judges and clerks, and other facilities will be needed to expedite the work of the courts. But given its urgency, an immediate action plan is needed.

“But there is a need for more judges in Jamaica, given the volume of work to be done,” he said, judging in particular by what he has seen in the other territories where he has worked. .

Regarding the reluctance of witnesses to appear in court and the fear of citizens to help the police with information, Justice Campbell is aware that the fear and culture of the “informant fi dead” was an obstacle .

“We need to restore confidence in the administration of justice. We need to let witnesses know that we will protect you when you come to court, and we need to be able to do that. Delay, in some quarters, is seen as beneficial to the defense because of the consequences it has on witnesses,” he shared.

Judge Campbell recounts the verbal abuse and criticism he faced when asked to rule on whether the Trafigura case involving senior People’s National Party (PNP) officials should be heard in public audience. Dutch authorities wanted to question PNP officials about a $31 million donation in 2006 by Dutch oil trading company Trafigura Beheer to the party.

“The invectives and the comments that were aimed at the court were, without a doubt, the most painful that I have endured throughout my judicial career,” he revealed.

After hearing legal arguments, Justice Campbell ruled in 2011 that it should be held in open court. The decision was appealed, but the UK Court of Appeal and Privy Council – Jamaica’s final court of appeal – upheld the decision.

The hearing was held in open court this year.

“A judge must be firm, must respect your conviction and know that you are part of the Constitution and that you cannot be beholden to anyone. So do your job without fear or favour,” the Kingston College old boy advised.

“As a graduate of Norman Manley Law School, I share a special bond with members of my class of 1975. We were the first group of West Indies-trained lawyers and this class produced some of the finest legal minds in our jurisdiction. . ”

Justice Campbell said he would be forever grateful to ordinary Jamaicans who, through government policy, funded his higher education.

“My parents, as hardworking and diligent as they were, would not have been able to meet the economic cost of my education,” he said last week.

And looking at his career, he has no regrets.

“I have absolutely no regrets over my stance on the legal issues that have arisen. I have never been interested in being popular; my goal has always been to be guided by the law and follow the law. wherever she would take me.

Justice Campbell advises: “To young lawyers entering the profession at this time, I implore you to remember the ideals you embrace in choosing this noble profession. Your training will allow you to participate in the administration of your country at all levels and from there you should never hesitate.