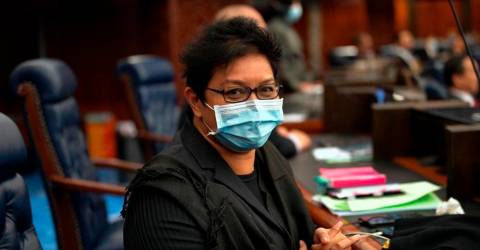 KUALA LUMPUR: The Parliamentary Special Select Committee (PSSC) on Women and Children and Social Development plans to provide a comprehensive set of recommendations or a roadmap on child victims and witnesses in the justice system.

Its Chairman, Datuk Seri Azalina Othman Said (pix) explained that the recommendations were the result of PSSC meetings and engagements during a four-day study trip to London, United Kingdom (UK), which s ended Thursday, May 26. with the aim of providing valuable information to local government agencies.

Azalina, who is also an MP for Pengerang (MP), said the recommendations would emphasize the constructive roles agencies could play as well as the need to address multi-agency policies and overlapping jurisdictions on victim support system to encourage and strengthen grassroots participation.

“As legislators, we are only part of the system and we need input and recommendations from all agencies. With their input, the PSSC can coordinate and develop a roadmap and make recommendations to improve the system.

“The UK supports child victims and witnesses well throughout the process. It’s not just about conviction rates, it’s about when incidents like this happen to a child, they know the system is there to support them,” she said in a statement.

The main objectives of the visit were to learn about the various victim support services, inter-agency cooperation, legal reforms, child protection policies, as well as other measures and initiatives focusing on victims. children and victims.

Azalina said the PSSC has recognized the need to harmonize and streamline existing Malaysian laws and to clarify definitions used in the interpretation of laws relating to children, as conflicting legislation could lead to inconsistent outcomes for victims and survivors. authors.

The PSSC intends to continue its investigation of this issue and expand its engagement with other relevant institutions and agencies, including the Bar Council, Attorney General’s Chambers, Department of Statistics Malaysia and others. key stakeholders.

The delegation also explored reforms to improve the experience of child victims and witnesses in the criminal justice process, good practices in working with children in conflict with the law, and the prevention of delinquency and recidivism through to various measures, including community-based interventions.

“This is a very important question. There are many aspects from which we can learn and make improvements to our system, including the legislative, executive and judicial functions. The PSSC wishes to extend its recommendations to all relevant ministries,” said Ahmad Fahmi. – Bernama