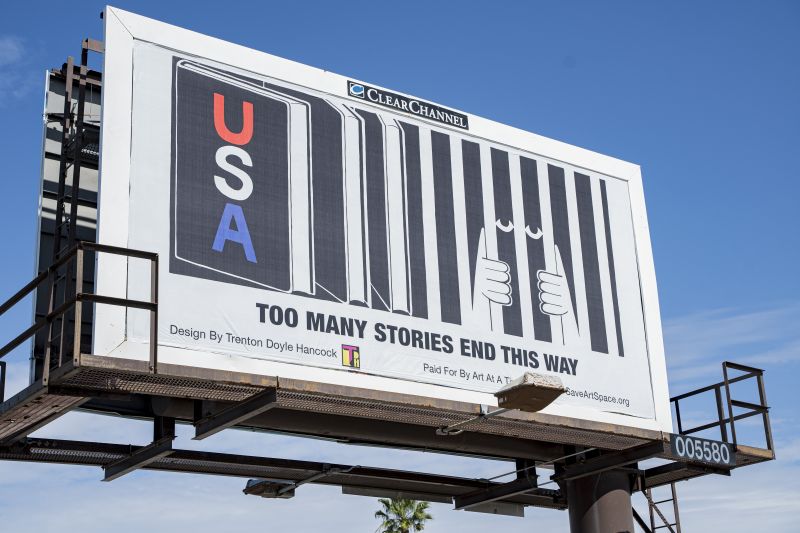 Featured on 30 billboards located near courthouses and government offices in Miami, the campaign features works by leading contemporary artists including Guerrilla Girls, Shephard Fairey, Trenton Doyle Hancock and Sam Durant. Two other renowned artists with direct experience of incarceration, Sherrill Roland and poet Faylita Hicks, round out the list.

Named after the size of an average American prison cell, 8X5 began in Miami due to the city having one of the highest incarceration rates in the country. By prominently displaying facts and statistics about the deplorable state of the region’s legal system, the project hopes to raise awareness of legal inequalities, initiate dialogue with judges and prosecutors, and provide artists with a platform on this issue. important.

A recurring theme of the artwork on display includes statistics unique to Miami’s local court system. Sherrill Roland’s billboard asks pedestrians, “Did you know that Florida is home to over 170,000 prisoners with a 10% margin of error?” thus concluding that the number of illegally convicted citizens is sufficient to fill Florida’s Pink Drive Stadium.

Meanwhile, The Guerrilla Girls, an anonymous group of feminist activists known for their scorching public art campaigns and The Advantages of Being A Woman Artist manifesto, shouted out “Florida Injusticia” with bus stop banners in Spanish and English as a way of highlighting the state’s enthusiasm for filling the prisons.

“Every day, our calendars and media feeds are overwhelmed with grief, fear and terror from communities abused and neglected by their governments,” says Faylita Hicks. “In this angst-filled world – maliciously designed and curated by our so-called rulers – Art A Time Like This can and does bring the relief, hope, inspiration and courage that so many need. “

By issuing an indictment against America’s criminal justice system, 8X5 hopes to reinvigorate the promise of change, which has stalled time and time again. It’s all part of Art at a Time Like This’s belief that artists and the power of visual images can inspire redesign.

Operating in Miami until July 20, 8X5 will also tour the country, stopping in New York, Houston, Los Angeles and Washington, DC, through 2023. Hopefully that makes a difference.