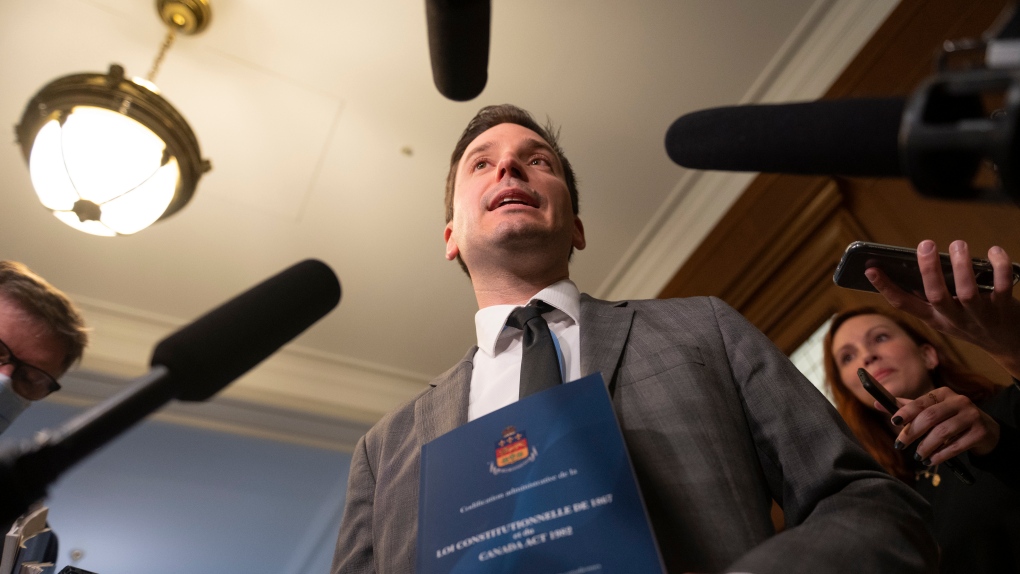 Quebec Justice Minister Simon Jolin-Barrette’s diplomatic mission to France was not only an opportunity to discuss the French language, but also to exchange ideas on how to improve the justice system.

“They have solutions in France concerning the legal delays”, explained Jolin-Barrette, after his meeting Friday with his French counterpart, Éric Dupond-Moretti.

Jolin-Barrette cited, among other things, “criminal procedures”, the equivalent of criminal law, where, “for minor offences, the procedure is done much more quickly”.

In Canada, the Jordan decision has been talked about a lot since its inception in 2016.

The Supreme Court ruling states that citizens facing criminal charges are entitled to a trial “within a reasonable time” and has been used repeatedly to halt prosecutions that were taking too long to reach a conclusion.

Meeting with the Keeper of the Seals and Minister of Justice @E_DupondM and @mboisvert_dg this morning. the #Quebec and the #France open a new chapter of justice relations. We will continue our exchanges on the subject of sexual and domestic violence in particular. 1/2

Although the Criminal Code falls under federal jurisdiction, the courts that deal with these matters are often provincial.

Jolin-Barrette also said he wanted to draw inspiration from France in terms of modernizing justice.

“They are doing very good things on digitization, the computerization of justice… They are already much more advanced than us at this level,” he said.

But it’s not just Quebec that has an interest in taking notes, Dupond-Moretti explained in a press release.

“It seems very useful to draw inspiration from Quebec experiences,” he said. “Whether it concerns violence against women, the development of mediation and amicable conflict resolution, restorative justice or the status of corporate lawyers, Quebec’s experiences are rich and can inspire further improvements in the service the French.

“This meeting was an opportunity to present our specialized court model and to discuss recent initiatives implemented on both sides to fight sexual violence and domestic violence,” said Jolin-Barrette, adding that “Quebec is the first jurisdiction in the world to implement this structure.”

Other subjects will also be the subject of exchanges of good practices within a permanent working committee, in particular the layout of courthouses, restorative justice and friendly settlements.

Jolin-Barrette was on a diplomatic visit to France from June 22 to 25. He gave a speech at the French Academy on Bill 96 and the preservation of languages ​​and met with the Secretary General of the International Organization of La Francophonie, Louise Mushikiwabo.


— This report from The Canadian Press was first published in French on June 25, 2022.