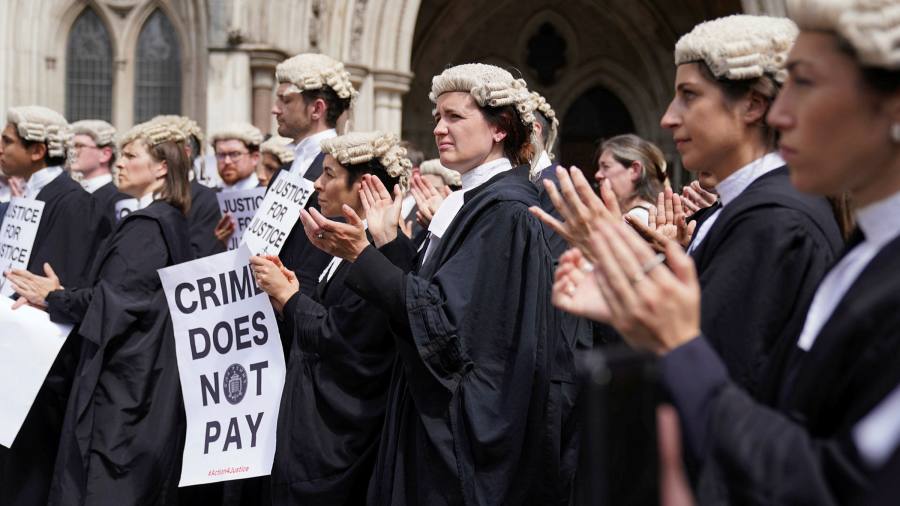 The writer is the author of ‘The Secret Barrister’

A criminal lawyer who refuses to appear in court is like a doctor who refuses to treat a patient. It strikes at the heart of everything we stand for. Yet as the Criminal Bar enters a second week of unprecedented industrial action, courts across the UK are stalling as lawyers walk out.

Although characterized as a dispute over money, the truth is that the action is symptomatic of much deeper problems with our criminal justice system, caused by more than a decade of funding its constituent parts. Cuts to police, prosecution, courts and legal aid have devastated the operation, leading to a record backlog of almost 60,000 Crown Court cases.

While it is correct that the government’s response to the pandemic has exacerbated the problem, it is wrong to suggest, as ministers are prone to do, that it is ‘Covid delays’ – the backlog was growing well ahead of January 2020, with judges warning against the government’s decision to close courts and artificially restrict “sitting days” in those that have nominally remained open.

It now takes an average of two years for a case to reach trial in Crown Court. The wait is most acute in serious sex allegations, in which complainants and defendants can expect a four-year gap between reporting the allegation and a jury hearing the evidence.

The toll of complainants and witnesses is not only measured by the growing number of those who lose faith in the system and walk away. If the case does eventually go to trial, the premium placed on oral evidence means that the delay has a direct impact on the quality of that evidence, and thus increases the risk of miscarriages of justice.

And while the effects are wild for those whose lives are on hold, there is a corollary impact on those who pursue and defend these cases. The lack of staff and resources has resulted in significant additional work and costs transferred to the independent criminal bar, increasing the unpaid hours of practitioners which already regularly stretch to 70 hours per week. Meanwhile, incomes for criminal lawyers have fallen 28% over the past two decades as legal aid rates have been repeatedly cut.

Skilled new entrants carrying tens of thousands of pounds in student debt are expected to survive on an income of £12,500 a year, a rate effectively below minimum wage. Unsurprisingly, many do not. And this pattern is not limited to new entrants; a quarter of all criminal lawyers have left in the past five years. The attrition rate after 10 years is surprising, particularly among women. Pay, conditions and expectations make an already difficult job simply incompatible with family life.

The inevitable result of this exodus is that we no longer have enough criminal lawyers to fill the backlog. In the last quarter of 2021, the number of postponed trials increased 50 times because there was no prosecuting or defense attorney available.

The government has been notified. When the Law Society threatened to sue in 2018, we were promised an independent review of criminal legal aid. This review has been postponed until 2021 and the government has largely ignored its urgent recommendations. Instead, ministers continue to push offers for “15% pay rises” and lawyers are promised “an extra £7,000 a year”. Whatever increase may be applied to fees, under current proposals, will not reach lawyers’ pockets until 2024, by which time it will have been entirely eroded by inflation.

Even an immediate pay rise of 15% in real terms – the bare minimum advocated by the report – would not reverse the nearly 30% cuts of recent years. It wouldn’t even undo the damage of the pandemic, during which the government’s refusal to financially support the majority of criminal lawyers caused a 23% collapse in our income.

We don’t ask for much. We are not even asking for parity with what we received before the legal aid cuts; just for fair pay for the work we do and an independent pay review body to prevent legal aid political football from getting us into this mess again. Our demands could be met overnight thanks to what the government has saved in not pay us in 2020/21. Instead, the Justice Secretary flatly refuses to even speak to the Criminal Bar Association, settling for sacrificing crime victims on the altar of his vanity.

It is tragic that we are here. It is tragic that we have been forced, at significant professional risk, to take this action. But the criminal justice system is in tatters. And it’s time for those who broke it to take some responsibility for fixing it.