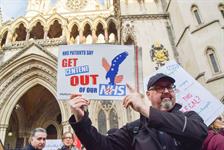 North Central London CCG (NCLCCG) and NHS England faced a legal challenge against a decision to approve a ‘change of control’ of AT Medics, an NHS primary care service provider, at the start of the ‘last year.

Anjna Khurana, a Labor council member from Islington in north London, backed the claim by Unite and Doctors in Unite campaigners who say patients were not properly consulted about taking control.

Resumption of the general practitioner’s office

But a High Court judge rejected the campaigners’ challenge on judicial review, rejecting their argument that the company ‘did insufficiently inform the public of the proposed decision’.

In her final judgment, Ms Justice Hill said: “Any member of the public with a particular interest in GP services in North Central London would know, from established and made public processes, when [primary care commissioning committee] meetings will take place and when documentation will be released in advance.

“The agenda and supporting documents for the December 17, 2020 meeting were posted one week in advance, in accordance with these processes.”

Ms Khurana also argued in her case that NHS commissioners acted “unlawfully” by failing to take “reasonable steps” to investigate the financial stability of the new companies. But Mrs. Justice Hill said Operose Health got ‘what it set out to get’ and there was ‘nothing to suggest…key information was missing’.

Unite doctors said it was ‘deeply disappointing’ that the case had been thrown out, but it was ‘even more imperative’ to campaign against the accelerated pace of privatization of the NHS by the government.

Chair Dr Jackie Applebee said: “I would like to thank everyone who has contributed to the crowdfunding that has allowed this judicial review to proceed – it has been a massive exercise in democratic participation.

“Although this is a setback, it will make us all the more determined to expose the misguided privatization ideology which undermines the founding principles of the NHS – that services are free at the point of delivery for all who need it.

“Activists will now consider the next steps for the campaign.”

Unite general secretary Sharon Graham said: ‘Despite this deeply disappointing judgement, the fight continues against the accelerating pace of privatization of the NHS in England. We must not allow our GP services to be outsourced to profit-seeking private healthcare companies.

“Our members of the health service want to work for the NHS, not for a private health company. Unite members, who use the NHS on a daily basis, want their tax dollars to fund it, not to boost corporate board profits or line the pockets of their shareholders.

Unite announced on November 19 that a judicial review would take place in early 2022 after “over £70,000 was raised by the public” to support the case.