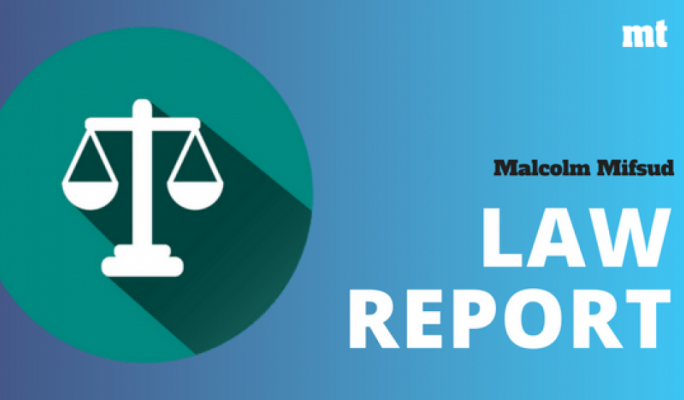 Judicial review can take place on fines, even if they have been paid

The decision to impose a fine by an administrative authority may be subject to judicial review even if the fine has been paid. This was held at Avukat Dr Malcolm Mifsud u Avukat Dr Cedric Mifsud -v- Il-Bord ta ‘Sorveljanza dwar Sanzjonijiet, decided by the First Chamber of Civil Courts on March 11, 2022. The Court was presided over by Judge Audrey Demicoli.

The petitioners filed a motion under oath, in which they asked the court to declare that a decision taken by the Sanctions Review Board was ultra vires within the meaning of section 469A(1)(b) of the Code of organization and civil procedure and that the Council is liable for damages.

The Council filed a statement of defense and ruled beforehand that the decision subject of this case is a fine of €800 and once this has been paid, then the Claimants have accepted the imposition of the file. The Council also considered that it is not a public authority within the meaning of Article 469A of the Code of Organization and Civil Procedure (COCP).

The Court analyzed the case insofar as the Council had sent a letter in September 2022 to Aegis Corporate Services concerning services rendered to a Russian national, who was subject to sanctions imposed by the European Union, because he had registered his yacht in Malta. The Council held that this was contrary to Section 17(6) of the National Interest (Enableing Powers) Act.

Dr Cedric Mifsud was the resident agent and the Board concluded that since he was a shareholder of Aegis Corporate Services Limited, the company was liable.

The Company still sent all the information on sanctions screening. Dr. Mifsud explained that the registration of the vessel and the activity of resident agent was carried out by the law firm and not by the business services company. The ship actually belonged to another Russian national. Similarly, the council imposed a fine of €800 on the law firm under section 17(6) of the National Interest (Enabling Powers) Act. Dr. Mifsud explained that the firm paid the bill because if it was not paid by March 15, 2021, the fine would increase daily.

On the first plea, that once the fine has been paid, no further action can be taken, it follows that the Commission had sent an email on 29 March 2021, stating that if the fine was not paid that day, the fine would increase. The answer was that the payment was made, however, it was on condition.

In the response email, Dr Mifsud wrote: “Despite payment being made, the imposition of the fine will be challenged in the appropriate forum. The fact that there is no appeal does not mean that we cannot contest it. We are of the firm and scholarly opinion that the decision is flawed both procedurally and legally. The lawyer sent proof of payment.

The Court considered that it was clear from the exchange of emails that the fine was disputed. The Council argued that the maximum fine is €1,000 and therefore the lawyers would not have paid it and let it accumulate to the maximum. The Court disagreed because the fine was a penalty regardless of the amount of the fine.

The Court referred to previous cases where fines although fines were paid, the court ordered them to be reimbursed. In the case of William sive Willie Grech u Anna Grech -v- Awtorita ghat-Trasport f’Malta, the court ordered on 18 September 2012 that the claimants in this case be reimbursed for the overcharged registration fee. The tax was paid under protest. In Public Broadcasting Services Limited -v- Awtorita tax-Xandir, decided on May 11, 2009, the Court held that the law requires us to obey the law and pay a fine. If he disputes and proves that this fine was unfair, that person should receive a refund.

As to whether the Council is a public authority in terms of judicial review, COCP Section 469A states that such public authorities must issue licenses and warrants. The Council does neither and merely makes decisions, makes recommendations and advises.

The petitioners argued that Section 469A of the COCP gives a broad interpretation to the term “Committee” and that the Sanctions Monitoring Committee falls within the definition, as it preforms an administrative act and it has imposed an administrative fine and, therefore , it exercises administrative powers. Section 468A states:

“‘Public Authority’ means the Government of Malta including its ministries and departments, local authorities and any body corporate established by law and includes councils which are empowered by law to issue warrants for the exercise of any trade or occupation.”

The Court agreed with the plaintiffs because the law uses the word “includes” and therefore councils should be included as public authorities. In fact, the National Interest (Enabling Powers) Act shows that it is a regulatory body.

The Court then decided to dismiss both pleas and ordered the case to continue.