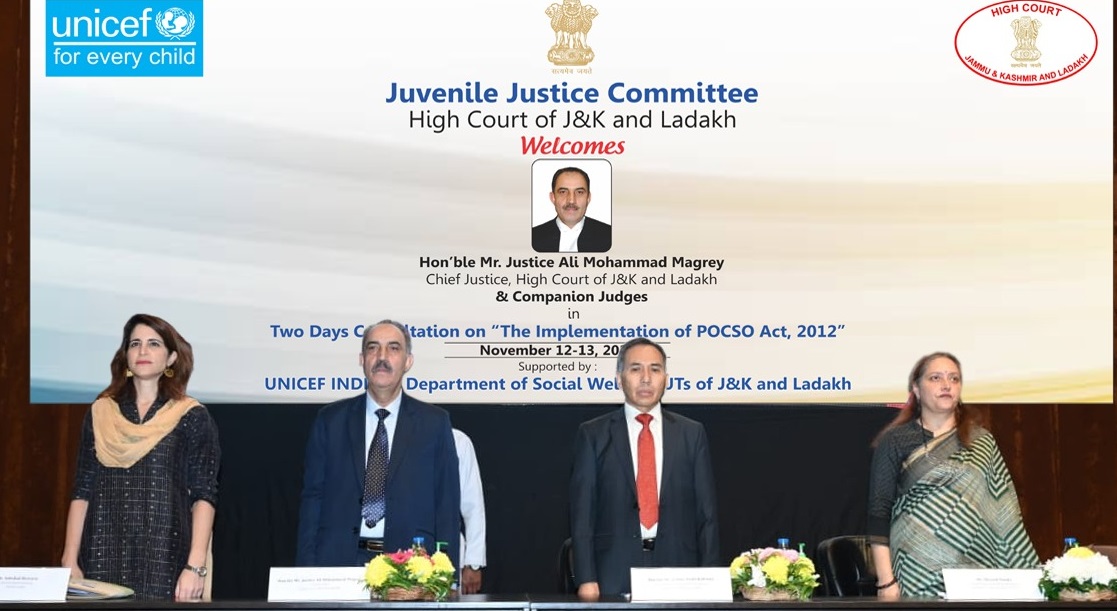 Jammu, November 12: The Chief Justice of J&K and Ladakh High Court, Justice Ali Mohammad Magrey, said on Saturday that the juvenile justice system in the two union territories is gaining momentum and has achieved satisfactory results in the implementation of the POCSO law in letter and spirit.

Justice Magrey was speaking as a key guest at a two-day consultation on the implementation of the POCSO Act 2012 here organized by the Justice Committee, High Court of J&K and Ladakh in conjunction with Department of Social Welfare, J&K and Ladakh UTs and supported by UNICEF.

Justice Magrey looked at the journey of the juvenile justice system and also the POCSO Act of 2012, in the country, particularly J&K and Ladakh UTs.

Commissioner Secretary of the Department of Social Welfare, Sheetal Nanda, stressed the need to organize sensitization camps to sensitize not only children but also parents about the behavior and attitude of people likely to commit offenses against children. She said the conference is a welcome opportunity where all stakeholders can deliberate on the provisions of the POCSO Act.

UNICEF India Child Protection Chief, Soledad Herrero, commended the High Court of J&K and Ladakh for playing a proactive role in implementing not only the Juvenile Justice Act, but also of the POCSO law. She said there is a need for greater deliberation on the issues of victims of child abuse.

Juvenile Justice Committee Member Secretary Amit Gupta in his welcome address gave an overview of the program. He said this was the first time consultations on the POCSO Act had been held by the JJ Committee, as previously all four roundtables were on the Juvenile Justice (Care and Protection) Act.

2022-11-12
Previous Post: Arrested protesters in Iran face legal system against them
Next Post: Justice system must ‘change at the root’ for domestic and sexual violence, experts say