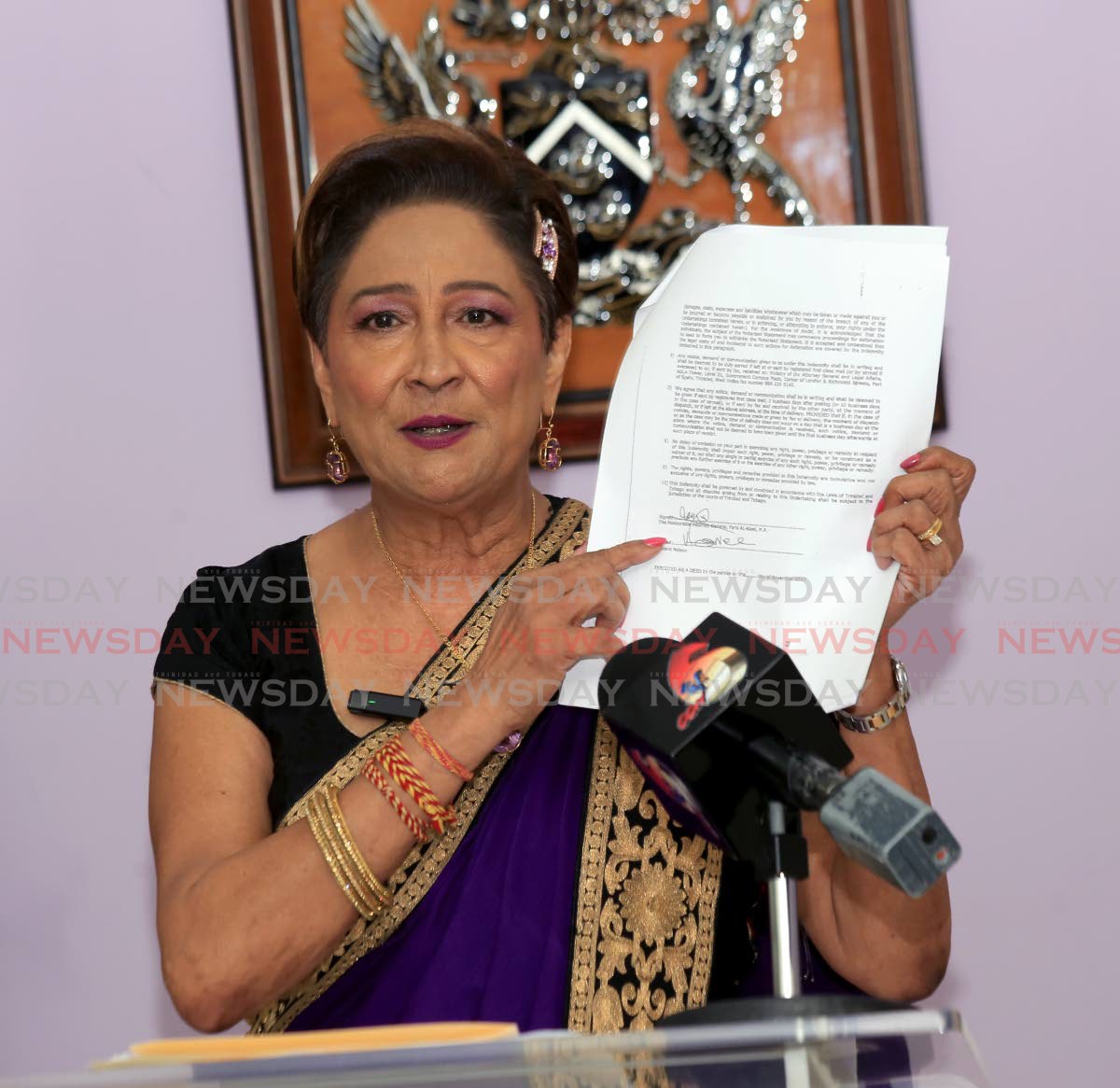 OPPOSITION leader Kamla Persad-Bissessar on Tuesday accused former attorney general Faris Al-Rawi of polluting and contaminating the stream of criminal justice and renewed a call for him to be sacked or resigned.

The latest call comes after the collapse of criminal charges against former Attorney General Anand Ramlogan and former UNC Senator Gerald Ramdeen, who were accused of taking bribes from the attorney for the Jamaican-born King Vincent Nelson.

The case fell apart after Nelson, who was the main witness, refused to testify against the men until a civil suit for breach of state indemnity was concluded. In 2020, Nelson was fined $2.25 million for his role in the alleged scam. He argues that his indemnity exempted him from civil and criminal proceedings.

Speaking at a press conference at the Charles Street opposition office in Port of Spain on Tuesday, Persad-Bissessar said Nelson was suing the state for more than $100 million for violating a agreement signed between him and Al-Rawi.

“It could hardly have been authorized by a single minister. It can’t just be the Attorney General frolicking alone…” She again asked if Cabinet was aware of the indemnification agreement.

She said the indemnity is not just “madness”, but that Al-Rawi had no legal authority to promise such things, as that is solely the responsibility of the Director of Public Prosecutions (DPP).

She said that if Cabinet had approved the compensation deal, “then the government would lose all legitimacy and authority to stay in power.”

She wonders whether the Al-Rawi have violated the separation of powers between the Government and the legislature. She described the interactions between Al-Rawi and Nelson as a “deal of favor” in the former’s “vulgar quest for political prosecution” against the men, both UNC members.

She called on Al-Rawi to reveal when Nelson filed his lawsuit and asked why he was hidden from the state. She said the lawsuit should have been disclosed to Ramlogan, Ramdeen and the DPP given the implications.

She said that between 2019 and 2022, while Ramlogan and Ramdeen were in court, Kawalsingh received state briefs amounting to around $13 million.

The opposition leader questioned the relationship between Kawalsingh and Al-Rawi as she called for the reopening of the investigation into Al-Rawi selling Kawalsingh his Porsche Cayenne in 2016.

She added that in his lawsuit, Nelson claimed he had text messages and emails between him and Al-Rawi after the severance was signed, confirming that it would stand.

Persad-Bissessar provided a copy of the indemnity, signed in 2017, which promises it will not be made public, debated in parliament or Nelson will be identified.

He also promised against any form of remedy, both criminal and civil, by the state will not be prosecuted.

She said it was not a “Get Faris campaign”, adding that she stood up for the people of the country.

“I have no interest in having Faris. Where there is wrongdoing I will expose it. That is my job as Leader of the Opposition.

She asked Al-Rawi to resign or the prime minister to fire him.

2022-10-12
Previous Post: Court to hear Najib’s application for judicial review against the Department of Prisons on October 19
Next Post: How Adnan Syed’s case exposed a failing justice system