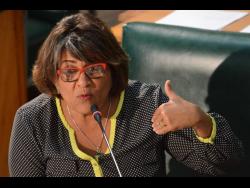 Marisa Dalrymple Philibert has sought judicial review of the General Legal Council’s (GLC) decision not to dismiss the misconduct case brought against her by the children of the late Clinton Clarke for her handling of her estate.

At the pre-trial on Monday, October 31, the case was adjourned to December 15.

Dalrymple Philibert, Speaker of the Lower House of Parliament and a member of the ruling administration of the Jamaica Labor Party (JLP), has been involved in the case brought by Clarke’s blood children for more than 20 years.

The GLC, which hears complaints against attorneys, denied Dalrymple Philibert’s attorneys’ request to dismiss the case in a letter dated June 2, 2022. The Discipline Committee, through a nine-page letter, said informed his lawyers, the king’s attorneys Ransford Braham and David Johnson, that he was refusing the candidacy. This follows his first motion to dismiss/stay proceedings with an affidavit in 2014 after the case was reopened.

Now in its 24th year, the GLC first dismissed the case in 1995, shortly after Dalrymple Philibert became MP for Trelawny Southern, but it was reopened almost a decade later.

Richard Clarke, the biological child of Clinton Clarke, who is the plaintiff and one of many legal beneficiaries, sought relief after the case lay dormant for years when the files went missing. The records were later found among the office documents of late disbarred attorney EH Williams. In 1997, the GLC dismissed the case without a hearing.

Fifteen years later, it was reopened after an updated affidavit was filed.

Dalrymple Philibert strongly refuted the complaint against her. She sought orders (pursuant to the Legal Profession Disciplinary Procedure (Amendments) Rules 2014 (Rule) 7(2) that (a) “Complaint No 168/2013 or any part thereof relating to conduct Claimant’s professional experience in dealing with the estate of Clinton Clarke, deceased, be dismissed and/or suspended on the grounds that the delay in investigating the said complaint has caused substantial prejudice to the Claimant and therefore constitutes an abuse of the Tribunal’s process (b) There will be additional or other relief which may be just in the circumstances…”

On June 29, 2017, an Amended Notice of Motion to Dismiss/Stay Proceedings sought orders that the delay would deny or deprive her of a fair hearing/trial; substantial prejudice has occurred as a result of the delay, and if the hearing is allowed to continue after all the delay and/or prejudice, there will be an abuse of process and/or violation of the provisions of the Charter of Fundamental Rights and Freedoms (Charter of Rights) sections 13 and 16(1) and (2).

His affidavit states that the substance of the allegation is the same as or similar to the earlier complaint, which is contrary to the principles of res judicata, issue estoppelsand that it was an abuse of process.

The facts of the case described by the GLC in the June 2 letter are almost the same as those submitted by Dalrymple Philibert following the GLC’s decision to reopen the case. Braham’s submissions for Dalrymple Philibert and John Clarke for Clarke’s estate, unrelated to the deceased, were taken and considered by the three-man panel of the Discipline Committee.

The letter says Braham cited a number of authorities to support the two issues that should ban the hearing. The panel said that the principles of the authorities did not apply because the complaint filed in 1995 was dismissed without a hearing on said merits.

John Clarke, in his submissions, said the Discipline Committee was a statutory creation and could not exercise any power or authority not conferred upon it by statute; that he does not have the power to suspend or strike out the case; that there was never a hearing on the merits for issue estoppels rise; and although there was a delay, there were reasons including the attorney’s own action.

Richard Clarke has written to more than a dozen law enforcement and investigative agencies seeking compensation for what he alleges was professional misconduct.

The complaint involves three properties, but at the heart of the dispute is the commercial property at 92 Barnett Street, which Dalrymple Philibert allegedly sold after fraudulently obtaining title and failing to discharge the business for which his services were sought.